Keeping endangered species around is an icon of environmentalist efforts, but in perspective, is it worth it? Should endangered species be any priority to Christians? There are easy ways to jump to a yes or no, but these are really questions that require some careful thought. Neither scripture nor science offer simple answers.

Unfortunately, scripture doesn’t offer much direct advice on this sort of problem. This makes sense, because managing ecosystems from our modern global perspective would have been foreign to ancient authors. But that doesn’t mean there aren’t any useful principles we can get from the Bible here.

I think two of the most important principles come from Genesis. In the first few chapters, we are shown that God’s attitude to creatures is that they are good creations. Furthermore, humans are given responsibility to rule over and manage the Earth. So isn’t it obvious that we should work hard to use our powers to preserve all species?

It’s easy jump to a yes at this point. Creatures are good, and according to our duty to take care of the planet, we should save endangered species. However, the reality isn’t so simple. I think that science offers some information we need to make an informed opinion here.

Earth is quickly losing biodiversity at present, but this isn’t the first time this has happened. In fact, the planet’s geological history shows 5 separate mass extinction events happening before the present. The one we probably hear about most is the Cretaceous-Paleogene extinction that killed off the dinosaurs, pterosaurs, and many other species. But that isn’t even the biggest extinction in Earth’s history!

Have a look at the above graph. The arrow pointing to the “Late Cretaceous” drop is the extinction event that infamously killed the dinosaurs. It’s a pretty big drop, but not the biggest. That award goes to the “Late Permian” extinction, which killed off a whopping 96% of all species on the planet! That’s quite the blow of biodiversity to recover from, but recovering is just what happened.

After every major extinction, the Earth’s biodiversity has always recovered. We understand pretty well that through the process of evolution new species arise. New life forms always emerge to take the place of old ones that go extinct. Our own form of life, mammals, seem to have used this opportunity. Mammals became more common precisely because other species like the dinosaurs weren’t around anymore to compete with.

This is the natural order of things: species come and species go. Even outside of major extinction events, there are always some species going extinct and others newly arising. That fact sounds downright ecclesiastical to me: “A generation goes, and a generation comes, but the Earth remains forever” (ESV Ecclesiastes 1:4). Extinction isn’t necessarily a bad thing, and is part of the natural creative process of the evolution of biodiversity.

That’s not to say that extinction is always OK either. We don’t just have the responsibility to maintain the Earth as a very nice zoo, but we depend on biodiversity for our very survival. To survive, we need oxygen to breathe, water to drink, food to eat, and low enough levels of dangerous chemicals like hydrogen sulfide around to not kill us. Not to mention how much of our economy depends on harvesting wildlife like fish, or growing crops. These are all services and supplies provided for us by the current balance of ecosystems around the world. Unfortunately, we’re more than capable of upsetting that balance. 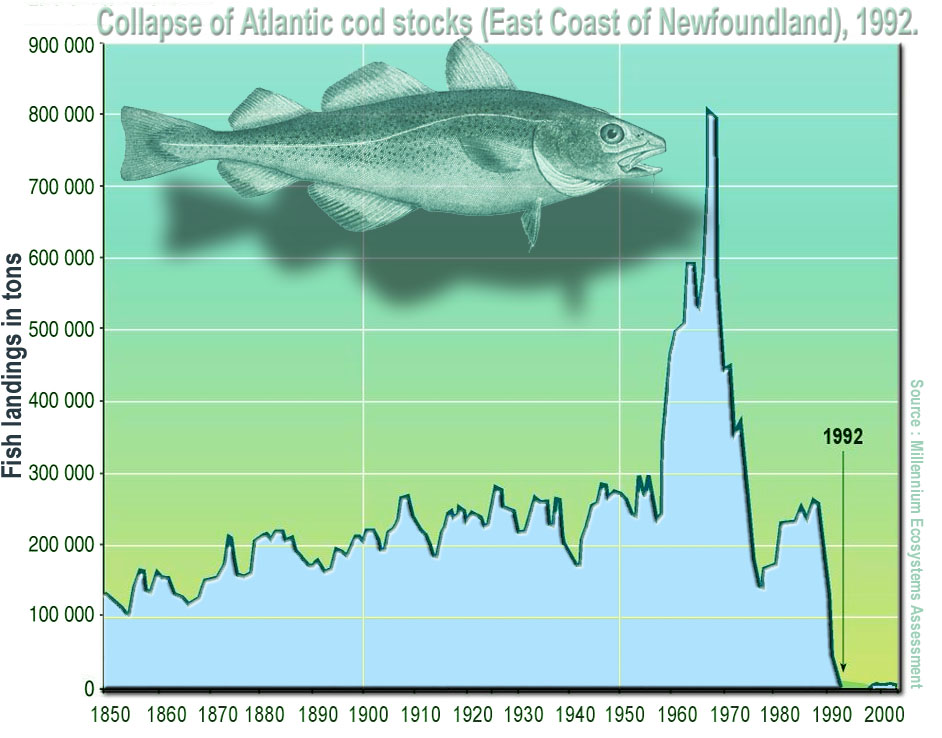 A classic example is the crash of Atlantic Cod populations after decades of over-fishing. In the above graph, you can see that around 1965, over 800,000 tons of Atlantic cod were being harvested per year. That’s an enormous amount of food supply for us humans, not to mention the economic value to us! Atlantic cod are not extinct yet, but the population has crashed and has yet to recover. It seems that the balance of the ecosystem here has shifted indefinitely.

And that’s just one example of species prevalence affecting us. In recent years, bee colonies have been disappearing, which is certainly a threat to our food supplies. For decades now, toxic algae blooms have been poisoning life in our oceans and lakes due to chemical runoff from human activity and climate change. That’s just two more examples, but there are many possible ways for the situation on Earth to go terribly wrong. If these sorts of problems are not managed, the result could only be catastrophic death and suffering for human and animal life. I don’t think there is any debate that we have a responsibility to avoid that kind of outcome.

So there are probably endangered species we can afford to lose, and will just get replaced by new species over time. There are definitely other species that would cause big problems for us if they go extinct. It may be tempting at this point to think that we could just focus on managing the species that are important to us, but things aren’t so simple. Unfortunately for that plan, life exists in tangled webs of ecosystems and depend on each other to survive, and we only know so much about how those webs are connected.

What we do know is that rapid change is dangerous. All of those mass extinctions in Earth’s history were a result of big changes happening quickly: things like enormous asteroid impacts, poison gasses building up in the air, or out of control volcanic activity. The biggest threats to human and animal life and well-being are likely large-scale habitat destruction and human-induced climate change at the moment. If we lose lots of biodiversity quickly, there is a high risk of losing species important to our survival. Not to mention the general increase in death and suffering that major extinction events bring.

Life is good, and biodiversity is both wonderful and useful to us. Loss of species can be sad, and if it is an important type of creature, it may even risk our health or well-being. But not all species loss is a terrible thing, and some is part of the normal creative process of new life forms evolving. Should we let a particular endangered species go extinct? Maybe it doesn’t matter, depending on the species. The best thing we can do for  all life is to try to manage the Earth to be as slow to change as possible. From a Christian perspective, I think this fits well with our call to be peacemakers as responsible rulers of this planet we depend on.